There's been a lot of talk on this subject over the years and I thought I’d share our findings and insight on the matter. This actually goes all the way back to my days as a Flash developer creating rich media experiences for users. Long before Steve Jobs decided to put the nail in the coffin by not supporting Adobe Flash on iOS, it was already dying because of its inability to be properly indexed by search engines. Ironically it made good headway near the end, but it was too little too late.

Now, we have HTML5 and can do all sorts of amazing, interactive things that were once reserved by proprietary platforms like Flash. This means we’re using W3C compliant, natively supported browser features so all should be well with SEO, right? Unfortunately it's not quite that simple...

First, let’s define what we mean by “interactive content”. I’m talking about any content that isn’t visible on a page until a user clicks, hovers or has some intentional interaction with the UI.

OK, now that we've got that covered let’s get back to the question. The short answer is yes. Let’s use the example above from the screenshot. We’ve confirmed that the following statement only appears within an accordion which needs an interaction to be opened.

The single intuitive interface of our affiliate management platform technology brings your campaigns into focus so you can drive more revenue.

If you search for the above string, it does indeed appear in Google (see below). This means that Google definitely DOES have mechanisms to find content inside of things that depend on JavaScript interactions to be revealed.

However, it doesn’t include the exact phrase you searched for in excerpt text, which is interesting. Instead, it shows the meta description text and then some other indexable text from near the top of the page.

Now, let’s search for the following statement that sits above the accordions and is always visible without interaction.

Joining the Pepperjam Network means your client will have access to thousands of publishers, in addition to our advanced performance marketing management technology.

Again Google finds a result, but this time you’ll notice that the exact statement appears in the search result instead of showing the meta description and supplemental text.

So what does this mean?

It’s hard to say. One interesting thing with SEO is we’ll never know exactly how Google’s algorithm works. It does tell us that the content is being considered differently by Google on some level. So while both statements were indexed, Google views the interactive content as somehow different.

My guess if I have to give one (which I think is only fair to you the reader) is that Google DOES prioritize the non-interactive content slightly higher. The thing is we don’t know how much. This makes sense though, as a web designer you’re kind of telling the audience, “this content is more universally relevant and should never be hidden”.

From everything I’ve read over the last few years, Google is shifting to more “people-friendly” results over the “robot-friendly” results that were most common 5-10 years ago. So in the above example, let’s assume that interactive (or hidden by default) text is still ranked lower by Google even though it DOES have the ability to index it. But what if this interactivity also increased the average time spent on the page by 33 percent? This is something Google certainly cares about, and could be a boost to the overall page even though the interactive bits of content are ranked slightly lower. And what if because of this cool interactivity the page gets shared on social media more? Inbound links would SURELY be a benefit to such a page.

When you should avoid using interactive elements.

When they just plain aren’t necessary. If you’re just creating interactive elements for the sake of creating interactive elements, you should probably think again. Ask yourself, does this really help UX? Is it really a burden on the user to have all the content shown on page load? If the answer is no, you should probably just keep it simple and focus on the quality of the content itself. We have decent reason to believe that interactive content IS still ranked slightly lower by Google and beyond that, they usually require additional JS and CSS which can slow down page load (which of course is also a ding against SEO). You can also end up making additional work (and code bloat) when trying to get interactive elements to perform well on mobile devices.

When you should use interactive elements.

If you just read the paragraph above I bet you can guess what my answer is going to be. You should utilize them when there’s good reason and when it positively impacts UX. If the “fancy” interactive elements create the urge to engage with the content further and the user finds them enjoyable, then it’s probably a great idea. You must also consider the type of content. While it would probably be fine to have a photo album in an interactive carousel, it would be really strange to put large blocks of text in a similar carousel.

We’ve seen search engines get smarter and smarter overtime. As sites become more interactive and engaging, it’s fairly safe to assume that Google will continue to work to understand and index this content the best they can. We also shouldn’t EVER count out the user. If the user is engaging with the content more because of interactive elements it will ultimately have a positive effect on SEO. In other words...

If it creates user happiness, feel free to use interactive elements in your design and trust that Google will ultimately reward you for making the world a slightly more enjoyable place.

Disagree? Please send us your comments below! 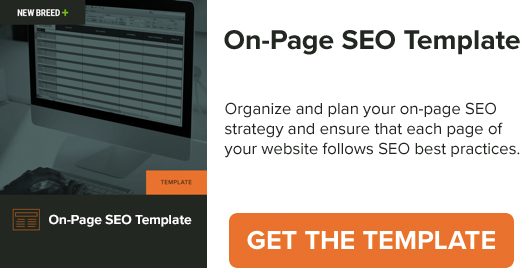 What is Sales Operations?

The Technology You Need for Account-Based Marketing Success

Account-Based Marketing (ABM) essentially flips the inbound methodology on its head by focusing on fit first, then interest.

Infographics have made their presence known on the web throughout the years. These informational graphics swept the Internet with their engaging designs and statistics....

END_OF_DOCUMENT_TOKEN_TO_BE_REPLACED

Christopher Mathieu is the Chief Design Officer at New Breed, where he oversees the creative strategy behind every project we produce. His unique ability to combine his fine art background with his technical web expertise has led Chris and his team to produce countless sales-ready websites and inbound marketing collateral that drive results.