How to Decide Between HubSpot, Pardot and Marketo 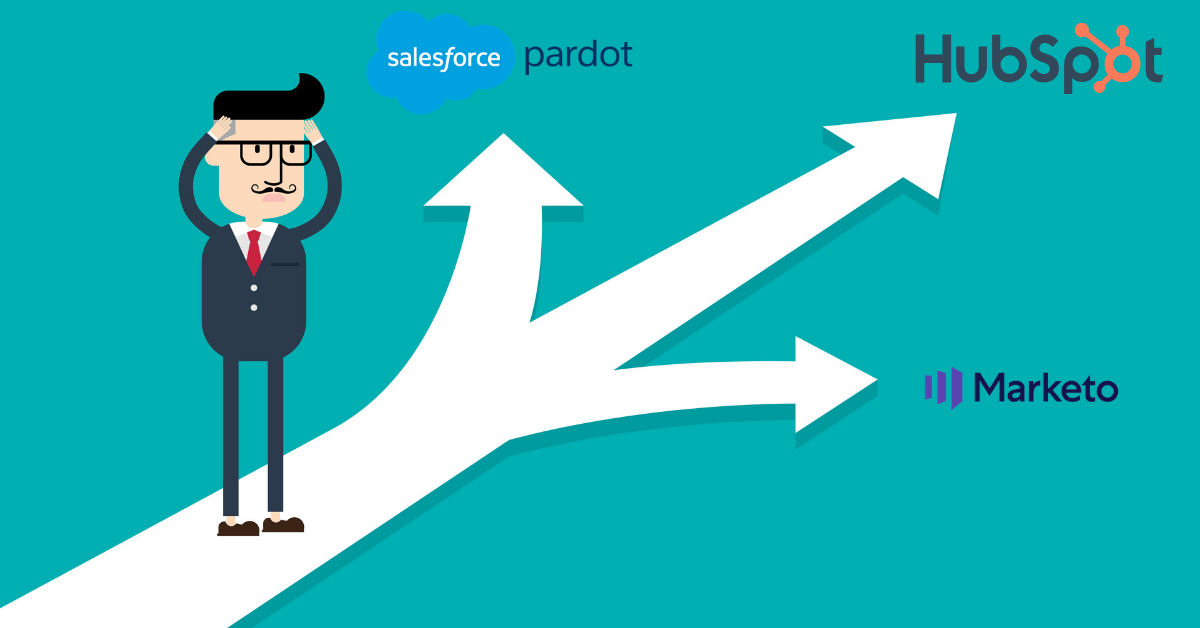 Before coming to New Breed, I was at a company where we didn’t concentrate on clients who used a particular marketing automation software. We worked with companies on HubSpot, Pardot, Marketo and a handful of others.

I probably had the most exposure to Pardot at the time, but I found myself looking forward to getting clients that used HubSpot. It was the easiest software to manage, and I could get work done more efficiently.

With that in mind, let’s discuss what separates HubSpot from the competition.

Typically, when people consider purchasing HubSpot, Pardot or Marketo, they want a marketing automation tool. HubSpot has evolved to be much more. Now, it’s designed to be an extensible platform, a tool that can be expanded beyond its original state.

As a whole, HubSpot is difficult to categorize, but it operates using different “hubs,” which are easier to understand. The marketing hub retains the elements of a marketing automation platform, providing blog, landing page, social media and search tools among other components. The sales hub is essentially a sales acceleration or sales enablement platform, offering sales automation, pipeline tracking and meetings tools. Finally, the service hub is a customer service and engagement platform, like Zendesk, and includes ticketing, live chat and a knowledge base to fuel customer success.

Combining these hubs and its customer relationship management (CRM) software, HubSpot differentiates itself. If users aren’t on HubSpot, they’ll have to expand their technology stack, attempting to piece together everything it offers.

For instance, you might adopt Marketo to create and track your landing pages and email campaigns, Google Analytics to measure the success of your website and Salesforce to track contacts on a CRM. But even if you use a separate tool for each capability, you still won’t be able to match HubSpot’s functionality.

On top of that, it’s difficult to ensure numerous pieces of software are communicating. Connecting them is time-consuming and requires upkeep, so having an integrated platform is much easier.

HubSpot helps mitigate technical debt, or the implicit cost of rework caused by choosing a limited solution instead of finding a better approach that might take longer. Initially, creating a patchwork stack doesn’t necessarily take more time than adopting HubSpot, but performing maintenance on those systems adds up.

HubSpot is also the easiest to operate. At New Breed, we have new employees who have never used a marketing automation tool before. Normally, they can start providing value to the company within days of starting.

Consider the way you update a website. Normally, you need to discuss changes with your web developer. Since HubSpot allows website hosting and employs templates, marketers can cut out the middleman and make the updates themselves.

Marketo and Pardot do not allow such ease. They’re not as user-friendly or intuitive. For instance, there are people that need to be certified in Marketo to use the platform.

But, HubSpot’s ease of use doesn’t come at the expense of enterprise-grade power. With features like multi-touch revenue attribution, account-based marketing and partitioning, HubSpot solves for even the most complex use cases.

To fuel their advantage in the market, HubSpot is constantly updating the features within its software suite. They offer native video hosting and conversational marketing tools. Marketo and Pardot are trying to introduce more features and provide integrations that supplement their lack of tools in these areas, but they are behind the curve.

As with any decision, there are pros and cons to purchasing HubSpot. If you analyze the products on a feature by feature basis, you might prefer another software for a given tool.

Because HubSpot is trying to do everything in one place, it offers a broad range of quality features, but you might be able to do more with certain aspects in other platforms. For example, the workflows tool in Pardot, called Engagement Studio, is slightly better than the one in HubSpot.

More often than not, though, the depth that HubSpot offers will satisfy the majority of use cases. If you have a fringe scenario where you need a particular feature that’s critical to your business that HubSpot doesn’t provide, it might not be the best solution for you. However, you’ll likely find issues can be solved another way with HubSpot.

ExactTarget, a marketing software company, acquired Pardot in late 2012, and Salesforce acquired ExactTarget in June of 2013. Over time, Salesforce hasn’t invested as heavily in Pardot.

A few years ago I attended a Salesforce conference in Atlanta. When I walked around, I noticed a small Pardot booth positioned in the back corner of the conference center. Optically, that demonstrated the way I think of Pardot — pushed to the back corner while the company invests heavily in its other tools like their Marketing Cloud.

In terms of features, Pardot has decent tools for email marketing and forms. It also has respectable reporting capabilities, but most of that stems from its strong integration with Salesforce — its biggest selling point.

Salesforce is still considered the best-in-class CRM. While HubSpot is starting to compete heavily in that category, ask the average business owner what CRM they use, and they’ll say Salesforce.

Since Salesforce is directly affiliated with Pardot, they integrate well, but not much differently than Salesforce connects with most other platforms. When it comes to sharing data, Salesforce can align on a one-to-one basis whether it’s with Pardot or HubSpot.

Also, Pardot’s workflow system, Engagement Studio, is a powerful tool. It’s quite comparable to HubSpot’s workflows, but there are a few nuanced features that are nice to leverage as a marketer. That doesn’t mean Pardot is better overall. Whatever slight edge you might be losing, HubSpot makes up for with its other features.

Marketo is a powerful tool from a strict marketing automation perspective. However, you’ll run into the same issues that you do with Pardot — it doesn’t have as wide an array of features, and it’s not an all-in-one solution.

To illustrate, consider the typical inbound process of a prospect moving from your blog to a landing page and converting into a lead. For that to happen, an individual finds your blog, clicks on a CTA, goes to your landing page and submits your form. That whole process can live on HubSpot. After you write the blog, as long as your templates and pages are built, you can link everything in minutes, creating a miniature conversion funnel.

With other platforms, arranging that conversion path takes much longer. On Pardot and Marketo, you can’t go into a blog post and select one of your previously made CTAs to insert. Instead, you have to find an image, embed it in the blog and link it to the landing page. You can’t report on that CTA either. Nothing is connected like it is on HubSpot.

In addition to its breadth of features, Marketo struggles in usability. The power of their tools comes at the expense of user experience. While your average Marketo user will be satisfied with the depth of the tool’s features, chances are that they won’t enjoy using it.

Marketo is also similar to Pardot in that it is a sub-brand. Adobe acquired the company in October 2018. While Adobe will probably invest more in Marketo than Salesforce does with Pardot, at the end of the day, it still represents one product in a whole suite and will likely garner less investment than HubSpot as a result.

Also, since Adobe’s acquisition of Marketo was so recent, it will take time to blend the companies from a process and workforce perspective. Once they do, Adobe might build Marketo into a much better tool, but it will take time.

At this point, Marketo does integrate well with many tools. It also has a strong account-based marketing (ABM) tool. If your company has a niche market and you have to leverage ABM to grow your business, Marketo could be the best option. But it’s worth evaluating what HubSpot can do, especially with the ABM features that are now available.

At the end of the day, HubSpot wins on most of the head-to-head comparisons. It provides the best bang for your buck because it has the widest range of capabilities. It’s the most user-friendly, and it’s making the most improvements. Don't just take my word for it, check out the graph below from Google Trends showing the interest level in HubSpot over time compared to Pardot and Marketo.

HubSpot has just become better and better over time. Yes, you can always find something that you dislike, as with any tool you use, but I find that happens far less with HubSpot compared to other tools.

Sure, you can find the occasional aspect where Pardot or Marketo has an edge, but, when push comes to shove, give me the platform with the most capabilities and efficiency. HubSpot gets the job done.

If you want to learn more about how your tools work together to contribute to your marketing efforts, request a software evaluation. 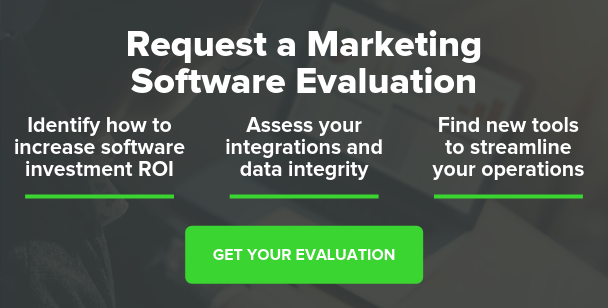