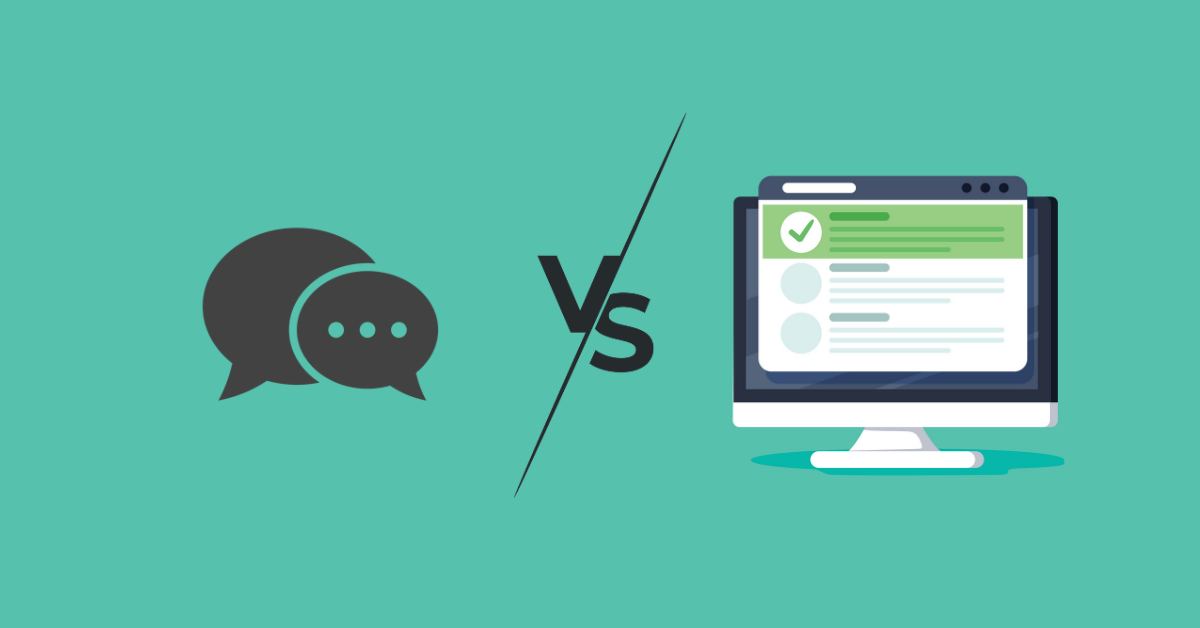 Over the past few years, conversational marketing has been a hot topic in the marketing industry. As chatbots started to be used as a lead generation tool in addition to a support tool, they started being pitched as a replacement to traditional forms.

As conversational marketing platform Drift pointed out, you’d never have to fill out paperwork before getting to learn about a product in a physical store, so why should you have to on a website?

Chatbots provide a more human experience for online buyers. But, what about the people who shop online because they don’t want to engage with people?

Chat Vs. Forms: Which Creates a Better User Experience

While the growing use of chatbots across marketing websites is typically due to the improved experience they can potentially offer site visitors, their relative newness can combat that objective.

“I think people are used to forms and not used to chat yet,” Adam says. “I don’t think folks are at the point where experiencing a chatbot is something they would do for a larger conversation outside of ‘I need support on this.’”

But prospects won’t become more comfortable with chatbots unless they’re given the opportunity to engage with them. So, sticking solely to forms because they’re the norm can put you at a disadvantage.

“I have concerns about the staleness of forms. I think there’s an overreliance on the form strategy concept we’ve built working in every possible use case. I think there are cases where form strategy works, and there are cases where it doesn’t,” Mike says. “Chat is more interactive. It feels more tangible. It doesn’t feel so cold and isolated. And, I think from a user experience perspective, that represents a real innovative potential for lead capture.”

While chatbots and forms can both be effective for lead generation, if a visitor is accustomed to being taken to a landing page with a form after clicking on a CTA, a chatbot opening instead can be jarring.

“That’s one of the things that I very much dislike. If it’s a button that says ‘request a demo’ and a chatbot opens from clicking that button, I think at this point it hasn’t been established that clicking a button is going to prompt a chatbot unless [the button] explicitly says that,” Adam says. “From the conversion perspective, I’d rather [the chat] pop up and take the full screen. I think that makes more sense than just appearing in a right-hand sidebar, which feels intrusive and spammy to me rather than helpful.”

Mike, on the other hand, doesn’t think that not expecting to have to interact with chat will overly hurt CTA conversion follow through.

“You click on a CTA because you want to take a specific action,” Mike says. “I'm not so worried that there's going to be a big drop off because the visitor doesn't go to a landing page specifically. You just need to make sure they can take the action they had originally wanted to take from that CTA.”

Mike, however, does acknowledge that not being able to see all the info required upfront in chat can pose friction — a problem that doesn’t exist in well-designed forms.

“With a form, you see the form. You know all the questions that are being asked. It’s less of a mental strain on me to engage with some silly chatbot or even talk to someone live. I could just go fill out everything and then be followed up with eventually,” Adam points out.

But, in practice, Mike hasn’t seen a significant drop off in conversations due to the lack of initial expectation setting.

Overall, both chatbots and forms can pose friction for site visitors. But, they can also both be effective if done well.

Best Use Cases for Forms and Chat

One of the biggest advantages of chat is its ability to convert visitors without forcing them to navigate to a different page. However, in cases where minimal information is needed for a conversion, a pop-up form can actually pose less friction while posing the same benefit.

“I almost wonder if the idea of using chat for light, top-of-funnel conversions is almost made obsolete by the pop-up forms,” Mike says. “What I love about pop-up forms is that you can fill them out without leaving the page that you’re on.”

For example, if a site visitor is on a blog post, you can present them with a pop-up form promoting a relevant e-book or whitepaper, and then they can submit and receive the offer with minimal inconvenience. Chat can accomplish a similar thing but requires more back and forth to collect the same information.

On the other hand, there are cases where chat can be a more effective replacement for forms.

Forms have limited ability to accommodate someone trying to convert on an offer they’re not qualified for. For example, if a company’s product only integrates with specific tools, prospects on the wrong tech stack won’t be able to effectively leverage a free trial. If a prospect indicates that they’re using an incompatible software on a form requesting a free trial, there’s no great way to communicate they’re not eligible for a free trial without completely ending the interaction.

With chat, on the other hand, you can build out responsive playbooks based on the prospect’s response and offer alternative next steps.

“For sophisticated pathways where there’s a nuanced qualification of why we want someone to be able to convert on this, I like chat. It gives me a lot more flexibility in what to do if they’re not qualified to take the action,” Mike says.

Chat can also be effective for free trial requests when a product requires its own form to be filled out, as Mike saw with one of his clients.

“There was a concern about form fatigue that was really important. In order to start a free trial, you had to fill out a traditional bottom-of-the-funnel form on-site and then you have to go to an API form and re-fill out a shorter form. What we saw was an enormous number of people who submitted the first form and then a 98% drop off to submitting the second form,” Mike says.

Changing the first form to a chatbot conversation increased follow-through by making users not feel like they were filling out two forms.

The ultimate frictionless experience for users is to ungate content entirely. In that case, you’re removing traditional forms from your site and adding optional chatbots as a means for communication.

“Our whole idea behind inbound is that the value of our content is going to drive [visitors] to the point where they want to talk to someone,” Adam says. “So why not make it much easier for them to eventually talk to someone and have a more elaborate conversation rather than having a PDF they download in exchange for an email and then you throw them in some email nurture strategy that you’re hoping eventually moves them down.”

While in theory, that will create the best possible user experience, it limits your ability to provide personalized and contextualized information to prospects.

Once you’ve identified a pain point or an interest, you can use targeted emails based on that to keep leads returning to your website.

An ungated piece of content with a chatbot on it can also be a continued reference point for users. If they bookmark that page, then the same chatbot will gain multiple chances to provide value and collect information in return. But, since engaging with that chatbot isn’t required, we don’t recommend turning all your content offers into conversational content pages.

“Every step of marketing innovation has been ‘how do we make this a more interactive experience for the user?’ I think that conversational marketing represents that next progression of interactivity: something that is really built deliberately to feel like a human-to-human interaction,” Mike says. “We just have to make it work without jeopardizing conversion potential.”

Neither forms nor chatbots are perfect, and which works better will depend on your audience, your brand and what the goal of each individual interaction is.

“Forms offer a more traditional experience, have the benefit of being user-friendly and fit naturally within HubSpot technical processes that we're used to establishing,” Mike says. “That familiarity is a trap, in my opinion. Most marketing innovation over time has been designed to make people feel like things are more personalized and interactive, and chatbots offer that experience.”

However, chatbots’ relative newness means that optimizing their effectiveness is still very much a work in progress. If forms aren’t working, it’s worth giving chat a try. But if your forms are doing a great job converting, you shouldn’t switch over to chat just to follow the latest trend.

“It’s less about chat versus forms and more about how we can use both together effectively to allow the user to choose the experience they’re most comfortable with,” Adam says. “Not everyone is going to want to have a conversation (with a human or a bot) as their first entry point. But those that are could be qualified or moved down the funnel much quicker than if they simply filled out a form.”

How to Do Accurate Sales Forecasting

At their core, forecasts are probable assumptions based on data. So, they won’t be perfect, but sales forecasting is still beneficial for your company.

How Inbound Marketing Teams Can Use Automation To Be More Efficient

Inbound marketing offers distinct challenges in the B2B world. Where its B2C counterpart can focus more on attention-grabbing spectacle and scattershot framing to attract...

Every year at INBOUND, HubSpot announces product releases and updates. At INBOUND 2020, the Sales Hub was the main focus, along with the CRM.